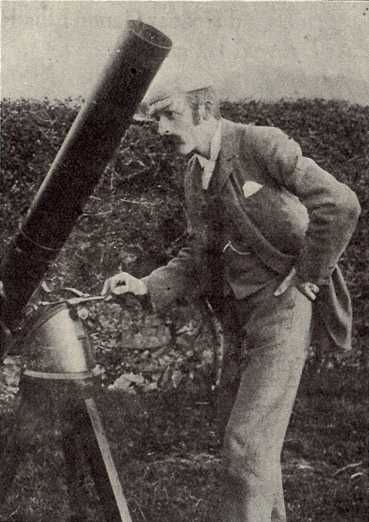 On December 7, at the home of his daughter Mrs. Arthur Scoones, Mimico near Toronto, Ont., Griffith Parry Jenkins died in his 82nd year. A son Archie, of Toronto, also survives.

Mr. Jenkins was one of the leading members of the Hamilton Centre of the R.A.S.C. when it was organized in 1909. He had been a member of the Astronomical Society of Wales and was acquainted with a number of English amateur astronomers. In this JOURNAL, vol. 5, p. 59, 1911, appears a paper by Mr. Jenkins entitled "A plea for the reflecting telescope" in which he gives many interesting incidents of his association with T. W. Webb, George H. With and others. In 1938 Mr. Jenkins brought to the David Dunlap Observatory a copy of the volume "Speculum Hartwellianum," by W. H. Smyth (London, 1860). On page 2 of the cover is the inscription: "Presented to the Reverend Thomas W, Webb, A.M., F.R.A.S., with the respects of Admiral Smyth and Dr. Lee, Hartwell, 27 February, 1860"; and on the adjoining fly-leaf is:

"This rare volume , printed for private circulation, was acquired by me fifty yars ago at a sale of the books belonging to my old friend, the Rev. T. W. Webb, when I then resided in the city of Hereford. I now donate "Speculum Hartwellianum" to the library of the David Dunlap Observatory, Richmond Hill, Ont., where I know it will be treasured by another old friend of long ago, Prof. C. A. Chant."
(Signed) G. Parry Jenkins
Toronto, September 17, 1938.

Both items above transcribed by David Rowlands from copy kindly provided by Scott Barrie, Ontario, Canada.