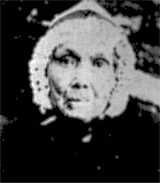 OLD FOLKS. - Mr. D. Paith Jones, writing to the Aberystwyth Observer on Aug. 1, mentions a Margaret Morris of Taliesin who says she can remember incidents that occurred a century ago; and from the tone of Mr. Jones's letter it is evident he believes it! The old dame professes to be 106 years old, and to recall an event that happened when she was three years old! Perhaps, as her memory is so good, she may be able to say where she was baptized, so that Mr. Jones may be able to have a look at the Register. He would in that case, if he found the record, be able to boast that he has discovered the oldest person who has lived in modern times! DUBIOUS.

DEATH OF A CARDIGANSHIRE CENTENARIAN. Our obituary column to-day contains the announcement of the death of Margaret Morris, of Tanyrallt, Taliesin, at the advanced age of 108, which took place on Thursday. She was well-known to many people for miles around, and visitors to Aberystwyth during the summer months, were in the habit of calling upon her in large numbers and frequently. Her faculties were fully retained almost up to the last, it being only during the past few weeks that her sight and hearing began to fail. She is is [sic] said to have been of a bright and intelligent disposition, and hence she was often resorted to by her neighbours within a large area as an authority as to dates when certain important events in their lives occurred, and other such matters. The deceased had also a vivid recollection of the preaching of the renowned Daniel Rowlands, of Llangeitho, and she, in company with others, walked many weary miles to enjoy the benefit of this great mans ministrations. She was never married. By her death a well-known person has been removed from the neighbourhood of Taliesin; but she has left a name behind her as being a thoroughly religious and God-fearing person from her youth up to her death.

FUNERAL OF MARGARET MORRIS, TALIESIN. The funeral of Margaret Morris took place last Tuesday afternoon. She was interred by the side of a brother of hers in the Congregationalists burial ground at Talybont. On the coffin it was inscribed she had lived 108 years. The order of burial was as follows: - At the house before the procession started, Rev R. Morris, Taliesin, read from the 13th verse to the end of the fourth chapter of 2nd Thessalonians, and offered an extempore prayer; and on starting, singing "Bydd myrdd o ryfeddodau," etc. The pupils and staff of teachers of the Llancynfelin Board School headed the funeral procession all the way. At the Calvinistic Methodist chapel at Talybont, Rev John Williams, Aberystwyth, preached from Matthew xxv, 13, and again at the grave read from verse 20th to 29th of the fifth chapter of the gospel according to St John, and offered an extempore prayer. The funeral was very largely attended, among those present were - Mr John James, mayor of Aberystwyth, and Mrs James; Mr Lewis James and Mrs James, Brynyrychen; Mrs John Williams, Aberystwyth; Mrs Williams, Sydenham House, and Miss Jones, late of the N.P. Bank, Aberystwyth; Rev Mr Lewis, vicar of Llancynfelin, etc., etc. Of the departed all spoke well; and Mr Williams in his sermon remarked that he knew her intimately at Aberystwyth a long time ago, and prominent traits in her history in spiritual and temporal matters alike were earnestness and faithfulness, constituting, he said, a character of stirling qualities.